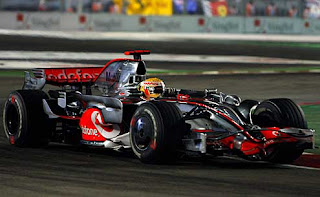 The Singapore Grand Prix, raced by the light of the moon, and 1800 bulbs. With memories of a dull Valencia we were a little sceptical, but Mr Ecclestone we were rather impressed. Singapore, in a bid to be seen as more than just a stop over, or a purveyor of dendrobidum orchids, looked magnificent. Two safety cars brought out unexpected results, a win for Mr Alonso (helped enormously by a race engineer full of gumption) A deserved second for Mr Rosberg, and a third for Mr Hamilton.
It must be impossible to get life insurance for anyone listing Ferrari pit crew as their occupation, surely even the arrogant reds must now change their system. Watching them run the length of the pit lane to release the fuel hose from Mr Masa's car has to be the funniest thing i have seen in a very long time. The Hound also did a jig when Mr Raikkonen hit the wall - he is so unsportsman like.
Posted by Miss Pickering at 4:14 PM