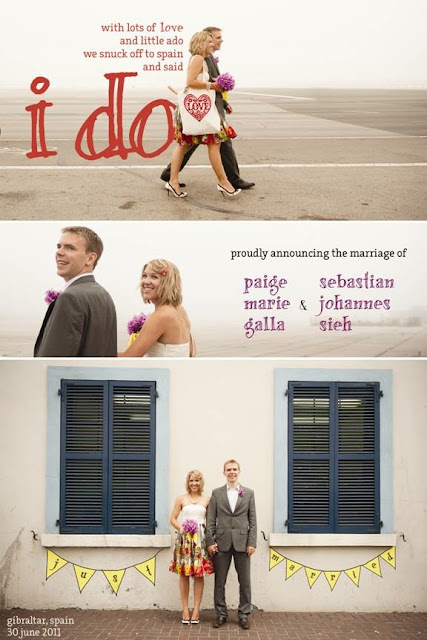 Just after the extravaganza that was the wedding of Emily and Stef, when we were still marvelling at the beauty of it all, and marvelling about how we actually did camping...an email came through.

The subject heading was SECRET QUESTION, and it read


So, top top secret, a secret someone may be sneaking away with her special someone else to tie an official knot next week, likely wearing this little frock.
And she is wondering if Miss P might have a suggestion of what kind of bouquet would suit it? It’s going to be in a different country, not sure of available floral resources, might need to use my hand-tied skills.


Any and all thoughts are welcome, only if you have a moment. No need for an answer before Monday!

and so i replied with squeals of excitement, and floral suggestions and fond wishes.

Then a few days later came this email, which is the one that had me in tears for many many hours.


She’s back and she’s a real Mrs. now! And a PMS, like your mum (that is something else!).


A flight got diverted to Malaga and included a two hour wait on board followed by a two hour drive to the sea, so the spinster missed the florist’s opening hours. So on the morning of the wedding, the Mr. had a lovely bright orange/red geranium for her at their First Look, and one in his buttonhole already. And then on the way to the ceremony, he pulled the car off the road and took out a kitchen knife to cut her some bougainvillea. Even though it didn’t exactly pull in the colors of her dress like she had planned, it was perfect and sweet and there was one just the right size for his buttonhole, too (those geraniums don’t seem to have much of a shelf life). She had bought a yellow scarf the day before just in case something like this happened, so she tied it around for another splash of color.


And then they had they longest procession imaginable across the airport runway into Gibraltar, followed by the quickest ceremony in the (very least attractive) registry office, but it was perfect and joyful and they celebrated all day long with cava and sangria and all the freshest local specialties, and even frolicked with horses in a field while the sun was setting at the end of the day. They felt really lucky to have their photographer take them around for four hours in the perfect late afternoon/evening sunlight.


Their photographer left these photos at check-out this morning, so here is a fuzzy scan of them.


The secret isn’t out yet, but an announcement is in the works and will be ready soon.


The new Mrs. Sieh (pronounced the way Americans say the last letter of the alphabet) sends her heartfelt hugs and gratitude for all the advice she sadly didn’t get to even use, and would recommend this idea to anyone who wants an intimate, adventurous wedding day.


For now, she’s walking on air.

I think a groom stopping to cut wild bougainvillea for his bride, might be quite the most romantic thing. Ever.
Posted by Miss Pickering at 11:33 AM

Probably the sweetest wedding ever.

Oh my, that is such a beautiful story xx

So much to catch up on, it's been a strange couple of weeks.

Perfect wedding....secretly what we all wished we'd done.

Pikey babies.....I think they belong to the grower himself...or is that a market myth?

Pizza....Mr B doesn't read your blog...I know, terrible behaviour....but he still surprised me with a home made pizza on Saturday night. Bet your kitchen came off better than mine.

i dont know but this makes me cry...
maybe because my son got married in june and my daughter is getting married next june...

Too cool for school (is this a uniquely Australian expression - in case it is cool!!!). We picked blossoms from spring trees and then the guests flogged them before I got to bring them home the next day...how rude!

I loved the beautiful build up to this secret adventure while I was still high on post-wedding happiness myself.

For the non-native speakers among us, how do Americans pronounce Mrs. Sieh new name?