Within these walls of grey 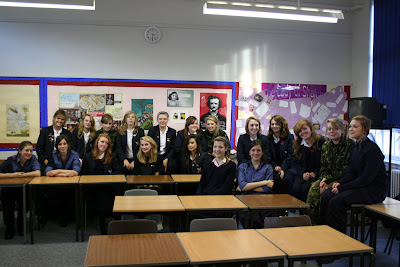 "In which year did you leave Stamford High School Miss Pickering?"
"1993"
"That's the year we were born" reply the U5.

Picking myself up from the floor, I continued with my diatribe on life post school, to three different groups. They all listened intently, and put their hands up before asking questions. You would be hard pressed to find a more thoroughly decent group of girls.

Our school motto is Christ Me Spede, for the leavers of 1993 it was "Go grab the world by the b**lcks" and I think that was the gist of my talks, (don't worry Mrs Salt - I used slightly politer words)

The school has changed a little, the quad has been glassed in, the desks are newer, and the assembly hall is a very interesting shade of peach. The teenage angst over parents, A-Level and university choices were just the same as 15 years ago, and they all still go to Quayhole's.
The girls are now allowed to do CCF - it is hard to look ladylike in army fatigues, girls might I suggest accessorising with kitten heels? or at the very least a corsage. 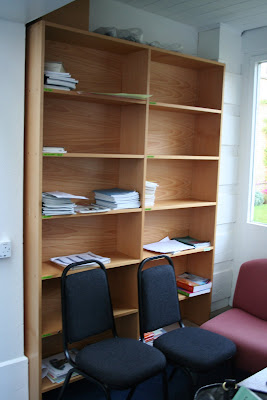 This is of no interest to anyone other than an Old Girl -the Prep shelves have had a 60 minute makeover.

Posted by Miss Pickering at 8:38 PM